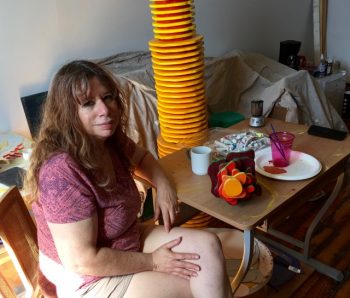 Marjorie Kaye’s sculptures reach out and in and up and beyond. The transcendent stacks of energy are constructed from pieces of plywood, which are cut into shapes with a jig saw, smoothed and then tinted with bold gouache color–or house paint washes. The pieces are assembled in sequences, one piece glued or nailed against the other, forming patterns that transit from basic schematics of color and size into higher, longer and wider dimensions that strive to be freed from the constraints physicality. In her gracious unfolding of form, Kaye considers the mechanics of duality, and the vibration between the laws of intention and those of magnetism.

Perhaps classical in inception, the sculptures are very particular to our present time and reflect the emotions of a meditation on internal space. “I reflect who I am as a person. I bring my inside experience outside,” Kaye says.

Kaye sculptures and paintings have been shown both locally and nationally. She has an BFA in painting and has done graduate work in printmaking. Her work has been reviewed in many publications including the Boston Globe and ArtScope Magazine. She is the founder/member/owner of Galatea Fine Art in Boston, MA, a large artist-run gallery.

In her most recent work Kaye breaks down the emotive qualities of sound, dissecting music, particularly the curvaceous, meticulous and musical chases composed by Bach. She appreciates Bach’s order and expression, pointing out that his arrangements are repetitive and sequential, like her art. “Bach didn’t express chaos. Order allows emotion to come through.”

Kaye grew up in the Boston area, in a musical environment. “It began in the crib–the listening, the appreciating, the dissecting. The family took me to Leonard Bernstein concerts, to musicals.” She remembers seeing, The Carnival of Animals with her grandmother. Kaye sang in oratorios. “In my mid-20s, after art school, I studied voice. But I found I was more interested in music theory than performance. The calibrations. Cadence. The ideas.”

“Yes,” she smiles. “I ride a lot of different horses,”  adding, “when I was young I  started a journey of many disciplines: music, the occult, theosophy, astrology, Judeo-Christian texts, the Kabbala. Eventually it culminated in Zen Buddhism.  And I’m still investigating, contemplating, researching…

“When I think about organized religion, I see no differences. Each is a system to look at the threads that join all of us together.” That thread is apparent in her art. “The most important thing in life is God and spirit. My  art is a spiritual practice; my ongoing contemplation is about the meaning of life. I ask: Who are we? What is nature?

She turned to sculpture as an expressive form when she and her companion, Artist George Shaw, began living together. “George is also a woodworker,” she explains. “There were of scraps of wood around the house. I started shaping the pieces and painting them. Finally I gave myself permission to do sculpture.“

Previously her painting (which she still practices and exhibits) had focused on the mandala. A mandala is a ritual symbol, representing the universe, that guides viewers into a sacred, internal space. “Instead of painting mandalas I began building them,” she says. 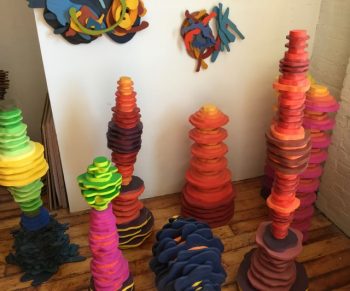 In 2016 Marjorie was awarded by the Provincetown Art Association and Museum: a Lillian Orlowsky/ William Freed Foundation grant. “On the application I wrote that with the funding I would get a studio and I did.” In June Kaye moved her tools, paints and wood to  a studio in East Boston, to 80 Border Street, Atlantic Works Studios.

In her studio she doesn’t listen to music. “I like complete silence. Plus I use power tools, and they make a lot of loud noise.” As far as color, the color of her work is bold. “The brighter the better,” she says. Orange seems to be the bridge color. “I use orange to pull everything together. To get from here to there.”

She can’t predict how having a dedicated art studio will effect her work. “For sure I have more opportunity to look and consider each piece,” she says. “But I worked hard in my home studio. I’m just a hard worker; it’s my nature. I’m process oriented. I make the best of any situation.” 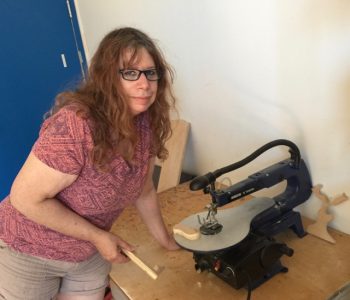 Marjorie Kaye getting ready to use the jigsaw 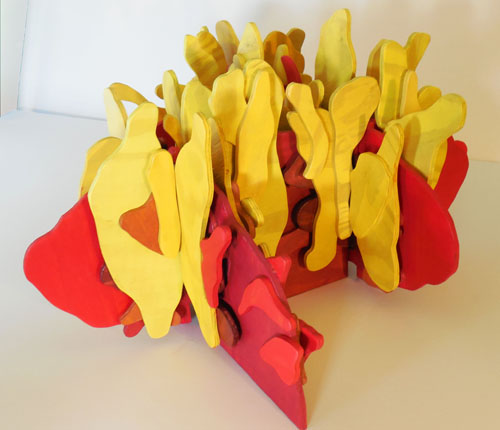 Happening at AWG: A Homage to Boston T
October 2016