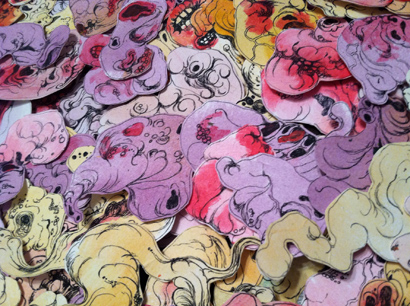 Getting There:  Terror and Desire in Uneasy Times

What do we want?  We often seem to hover in the uncomfortable regions of knowing both too much and too little.  A fifteenth century inscription in Paris’s Cimetiere Des Innocents refers to us as “Oh rational creature/who wishes for eternal life.”  The Jesuits say we’re a “being without a reasonable reason for being.”  Hank Williams says, “I’ll never get out of this world alive.”  Little wonder then, that we’re, most of the time, more comfortable with the sweetly false sentiments of Disney’s ‘When You Wish Upon a Star”:”Fate is kind./She brings to those who love/the sweet fulfillment of/their secret longings.”

In painting and video, Charlene Liska entertains the extremes of aspiration and fear, the competing bids for our attention between pop culture’s appropriations of these and blunt reality, and the places where the differences are not so easily discernible, or possibly even meaningful.

Leah Grimaldi explores the boundary where horror and seduction meet. This is a place of terror and the sublime. Using paper cut-outs with cartoonish lines and candy colors, Grimaldi constructs imaginary organic forms.  Tiny two-dimensional flesh pieces conjoin to form weighty figures, which are both disgusted by and delight in themselves and their fluid ephemerality.

“extreme seductiveness is probably at the boundary of horror.”
-Georges Bataille

Talking with Charlene Liska about Silence

May 2013
Opening party for control.release.transform Show Stills from “Getting There”
Scroll to top