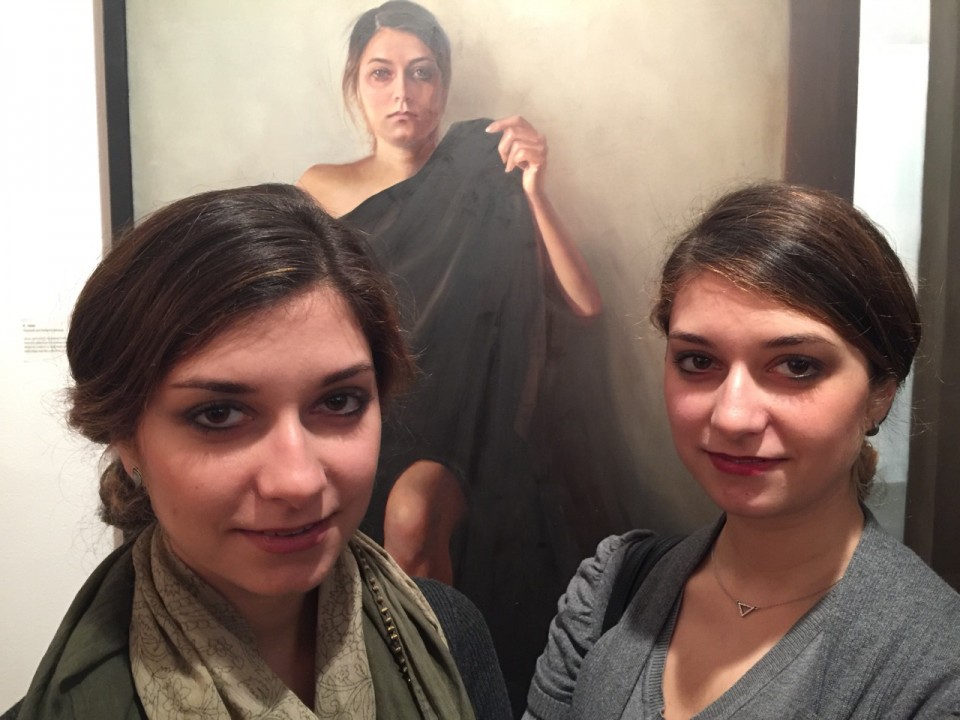 Artists Farzaneh and Bahareh Sararani in front of their painting “Alone”

What artist would turn down a second mind, a pair of extra hands, or a person who could stand by their side realizing and making manifest what they themselves were thinking?

The Safarani sisters, identical twins Farzaneh and Bahareh, have just that.  Since the age of 13 they have been helping each other do art. It wasn’t until their undergraduate years at the University of Tehran that they began to paint together.  Their process is familiar.  “First we decide what to do, then we discuss how to do it and make a drawing.  When we paint, I work on a area of a painting,” said Bahareh, “while my sister plans another painting. And then we switch.”  For the past two years the sisters have been students in a Master of Fine Arts program at Northeastern University/ The Boston School of Museum Arts where their studies are concentrated on painting and video art.

At The Boston Biennale 4, their painting “Alone” hung front and center in the left-gallery  “Alone” is a genuflection to the Italian Renaissance, with its strong sienna and umber palette and its particular luminosity, a result of the medium, oil paint on wood. Additionally, the twin’s painting makes a good attempt at melting colors into one another–the sfumato technique, similar to the one used by Leonardo Da Vinci to softened Mona Lisa’s smile back in 1503.

The female in the painting is one of the twins. In addition to being each other’s helpmate in the creative process, they are also each others models and muses. Keeping within the framework of Renaissance symbolism, the brown garment, or cloak held in front of the seated, classically beautiful female communicates modesty and religion. It is the same color worn by monks. Yet, in the frozen moment of the painting–just as the Mona Lisa is about to smile but hasn’t yet– the brown cloak is about to be opened. (Intuitively we know the cloak won’t be lifted because someone will stop the movement before the seated female reveals her heart and her secrets.)

That someone would be the missing part of the painting: the other sister.

A video accompanies “Alone” and places the second sister in the white slice of doorway, in the back chamber, in the secret territory, within the heart of the painting. (The video part of the painting was not included in the BB4 exhibit.) The second sister is naked. She is taking a shower. Her vulnerability is distant and veiled by a translucent curtain. She is washing herself. A baptism. A cleansing off of the religious, modest cloak.

Could the brown cloak on sister one suggests the hijab, a garment of modesty and religion, worn by women in Iran, the twins home country?

The twins intended to reveal nothing more than classical beauty and wonderful light in their painting.  “A painting is an object in itself,” Bahareh said. “It should be beautiful.  The subject doesn’t matter.”

Many people ask why they use wood, not canvas as a background material. “We are interested in browns and flesh tones and the wood works well for that.”

“Alone” is one in a series of six video-paintings that the twins are completing for their thesis at BSMA. In the series female figures–nude and clothed– appear in different rooms, in different situations. The intended tension is for the viewer to wonder if it is one person or two.  “A viewer could also read the painting as one person trying to know herself, trying to connect different parts of her identity,” said Bahareh.

Are two heads better than one? Joined-at-the-hip people making art and in unison seems unusual, and,yes, even weird, and at the same time symbiotically inviting. Exactly how unconventional is it? I took a quick doubles look on the internet and within three Boston minutes found four sets of artist twins currently living and making art together: the Singh sisters, living and working in London, are credited with the revival of the Indian miniature tradition within the modern art practice; Marina and Irina Fabrizius, twin sisters, born in Kazakhstan, living in Germany, paint very large, extreme color paintings reminiscent of the landscapes of their childhood.; Vietnamese twin brothers Thanh ands Hai Le, do laqueur paintings and run a bar, gallery and artist residency in Hue, Vietnam; and  ex-Florentine artists  Marcello and Alesso Bugaglar relocated to Maui, Hawaii, and have a business called Twins Fine Art. If you would like to know more about the Safarani Sisters, they have a website and a fine future ahead of them.