The German Christmas markets sparkle in the European landscape as places where reality can be suspended and grown-ups can be kids again. Central Berlin alone has 10 Christmas markets, each market with its own personality. They run from late November to early January.

There are constants: Twinkling rows of small shops bring crafts and specialty street-foods from all over the country. Sausages sizzle. Beer foams. Wonderful smells waft. Gingerbread morphs into festive shapes. Some markets even have ice-skating rinks, amusement-park rides, and carnival games of chance. 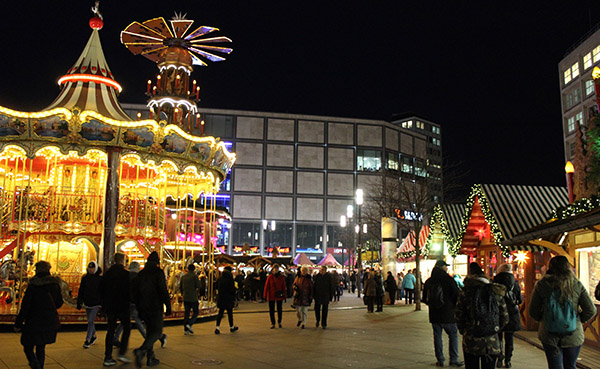 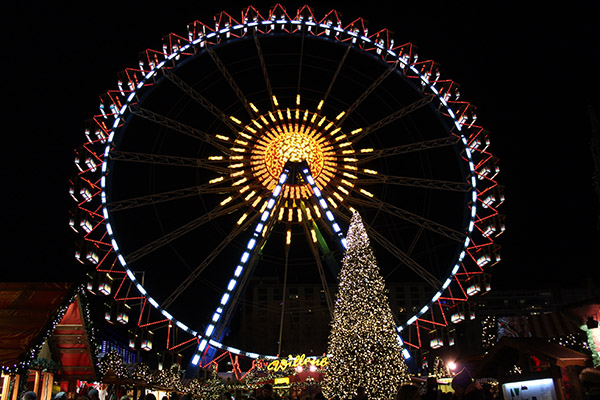 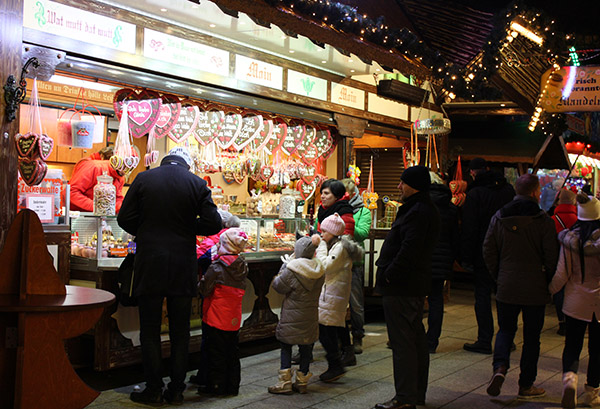 Drinks are plentiful, the Glühwein (hot mulled wine) and hot rum grog are most popular because it is cold outside, and most drinking places are outdoors, around circular fire pits or at long tables. My modus operandi is strolling among crowds with a mug of Glühwein or a package of hot roasted chestnuts, or sitting at a fire pit. 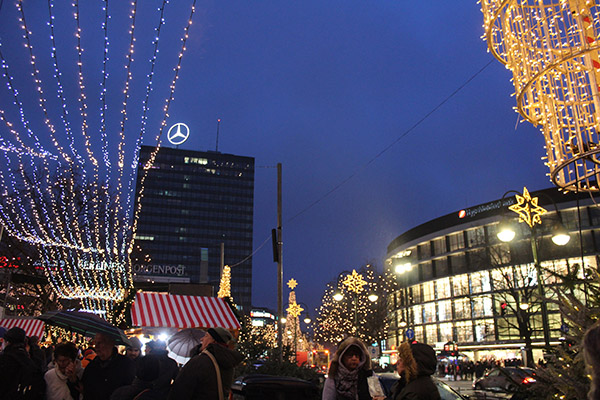 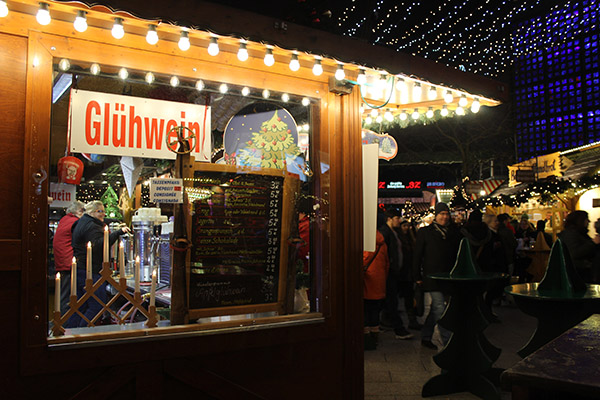 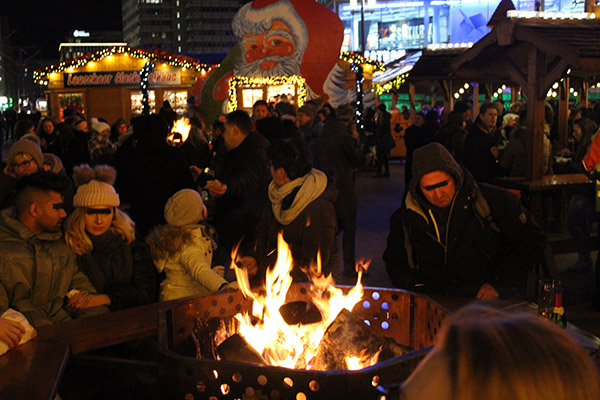 My favorite market is at Alexanderplatz, where there is a giant Pyramide with life-size Mary, Baby J, Joseph, shepards, and kings revolving on a 5-story-tall replica of a common German Christmas table-top decoration, which at home has tiny tiers propelled by candle heat. The ground level of Berlin’s monstrous Pyramide is a beer garden, the second tier is a restaurant. 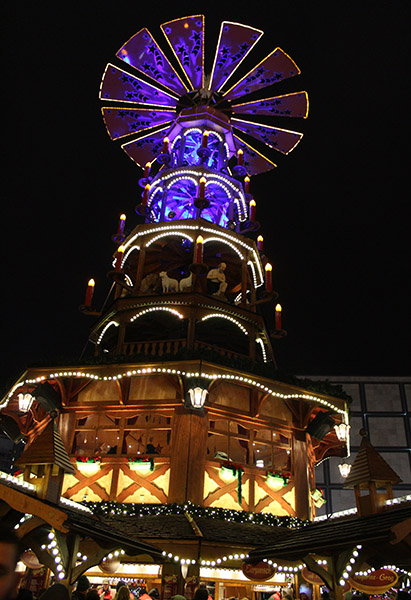 The Berlin Christmas markets are kitschy and crass, but within bounds. The mood seems a mix of merriment and nostalgia. Little kids are ecstatic with all the lights and movement, and adults are ready to drift into a realm of holidays long past with hope for the future. This is maybe why the killings at last year’s Berlin Christmas market seemed especially brutal. Its one-year day of remembrance happened this week in Berlin, and the observance was not without controversy.

When the attacker last year on Dec. 19th drove a 25-ton truck into the Christmas Market at Breitscheidplatz quickly killing 12 people and injuring 70 more, prime minister Angela Merkel herself seemed like a doe caught in the headlights.

She was blamed for the terror by the right wing for having allowed so many immigrants into the country (the driver of the truck was from Tunisia), and she was criticized from the left wing for showing so little compassion toward the victims and their families. She did not meet with the families after the attack. She did not write them personal letters. She did not offer government-funded reparation or funeral costs.

It’s not like terror is unknown in Germany. The 20th century Germans unleashed much of their own on the world. But since the 1972 terror attack at the Olympic Games in Munich, which now seems long ago, modern Germany has gotten off easier than many other countries in terms of this sort of violence. Frankly, Merkel has had little practice in dealing with terrorism on her own turf. 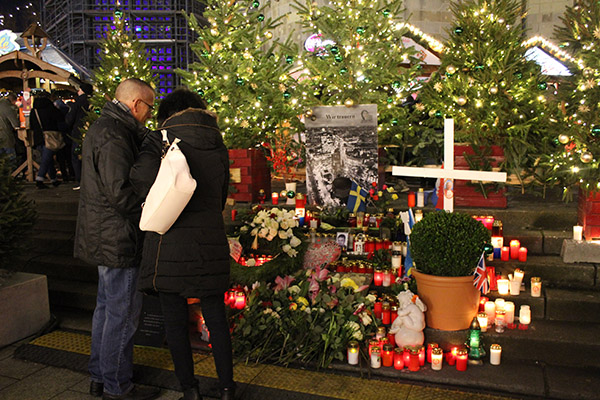 On Tuesday of this week, Merkel visited the site of the killings, where an elegant and unusual monument to the victims was unveiled (see next blog entry on artistic monuments to terror) and where fresh flowers and candles have been constant since a year ago. The Christmas market was shut down that day for the ceremonies. Bells tolled in the Gedächtniskirche – the Church of Rembrance of WW II events, on the steps of which the truck driver had mowed down the 12 victims. On Wednesday, Merkel finally met with the families of the killed and the injured, and talked with them for 3 hours. Overdue, but kind.

In the past Germans have been critical of the way some nations report terrorist events – nations that name and lionize the perpetrators, and leave the victims nameless. In response to this act of terror, German journalists have made a point of naming all 12 victims in each coverage of the event. I will do it, too: Anna Bagratuni, Georgiy Bagratuni, Sebastian Berlin, Nad’a Cizmár, Dalia Elyakim, Christoph Herrlich, Klaus Jacob, Angelika Klösters, Dorit Krebs, Fabrizia Di Lorenzo, Lukasz Urban, Peter Völker.

Three-foot high, one-ton sections of concrete barrier now encircle the same market and life goes on in a bent direction. 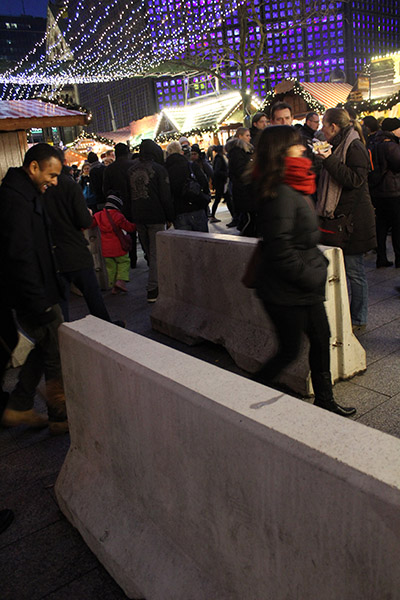 May our celebration of the new season, the new year, in any holiday form we choose, signify a fresh start for us all. 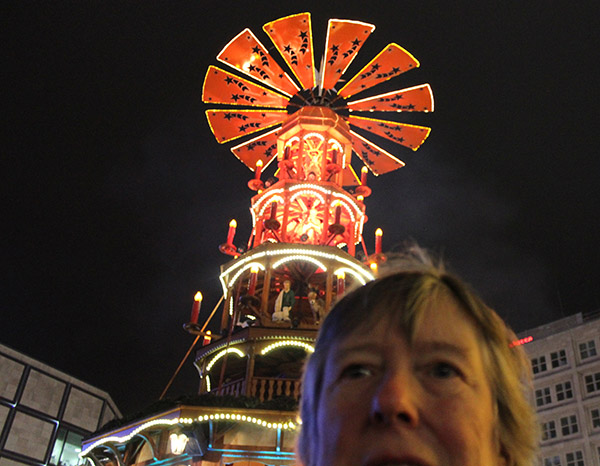